Devin McGlamery sang lead for the Dixie Melody Boys from 2000-2004. He joined Karen Peck And New River in 2005 and remained with that group until 2009 when he returned to a male quartet format with Ernie Haase And Signature Sound. He filled the lead position until the departure of Doug Anderson in 2015 when he shifted to baritone. McGlamery also released a solo project in 2013 on the Haase-owned StowTown Records label. 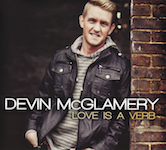 hi-res
2013 Love Is A Verb (StowTown Records/STR3118): Love Is A Verb (with Beyond The Ashes); Hold On, Help Is On The Way; In The Depths Of The Sea; From My Rags To His Riches (with Dailey & Vincent); I Will; I Tasted Your Water; While I Still Can (with Karen Peck & New River); As Long As You Will Walk With Me; Up Above My Head (I Hear Music In The Air) (Duet with Russ Taff); Waiting At Home; When He Was On The Cross; That's Why (with Ernie Haase & Signature Sound).