Copy the sample layout below, then click Edit in the upper right menu of your new page and paste it in the edit window.

Start by setting up a table for group members beginning with (:table border=1 width=300 align=right bgcolor=white cellspacing=0 cellpadding=10:) (:cellnr:) and ending with (:tableend:)

The history section is for pertinent facts about the group written from a neutral point of view. Include how the group began, key members, notable albums and songs, etc. Don't merely list who joined and who left. The right column already serves that purpose. The idea is to give an overview of the group's history...not to get bogged down with random details.

For example...Obituaries of group members should not generally be listed on a group history page except in cases where that group member's death directly affected the path the group was taking at that time. We have a category on the site for Individuals where you can write personal histories. In the case of Gold City, Doug Riley's death impacted the group directly, so he is mentioned. In the case of Eldridge Fox, his death resulted in the Kingsmen name being changed to the Carolina Boys, so he is mentioned in the Kingsmen history. When Jake Hess died, his death did not affect the Statesmen, so we would not mentioned his passing within the context of the Statesmen history. I use obituaries as one example, but this same logic should extend to other subjects as well.

Gold City
(1980-present)
The Mississippi-based Christianairs were renamed Gold City at the stroke of midnight on New Year’s Eve to begin the year 1980 with Dallas Gilliland singing bass, Bob Oliver at tenor, Jerry Ritchie on lead, and Ken Trussell filling the baritone slot. Floyd Beck owned the group initially. Tim Riley would replace Gilliland as the permanent bass singer in July of 1980 after the group relocated to Georgia. Harold McVay would fill in for approximately three months until the transition from Gilliland to Riley was complete.

The discography is the most complicated section of a group page. Note the format for adding album art, record label, product code, song titles, and group members who appeared on the album.

150X150 artwork is displayed first, then links to larger artwork.

Next is the album title in italics.

The (record label and product code) are inside parentheses followed by a colon :. Link the label name.

Finally, list the (group members) who appeared on the album inside parentheses. 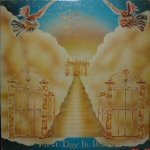 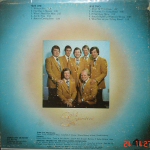 hi-res front hi-res back
1981 First Day In Heaven (Heavy Weight Records)/1144): Without Him; First Day In Heaven; When I Need Him Most; Just In Time; Jesus Is Coming Soon; When He Shall Come; At Sunrise, I'm Going Home; I'll Sail Away Home; Jesus Is Right For Whatevers Wrong; What Sins Are You Talking About (Bob Oliver, Jerry Ritchie, Ken Trussell, Dallas Gilliland, Larry Goddard, Cary Kirk, Wayne Hussey, David Holloway). 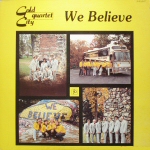 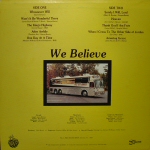 hi-res front hi-res back
1981 We Believe (Nugget Records/1207): Whosoever Will; Won't It Be Wonderful There; King's Highway; After Awhile; One Day At A Time; Surely I Will Lord; Heaven; Thank God I'm Free; When I Cross To The Other Side Of Jordan; Amazing Grace (Bob Oliver, Jerry Ritchie, Ken Trussell, Tim Riley, Garry Jones, Jeff Easter, John Noski, Jerry Lloyd). 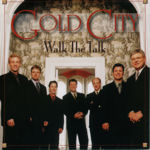 hi-res
2003 Walk The Talk (Cathedral Records): Somebody Sing Me A Gospel Song; That Little Baby; Calvary Conquers It All; I'm Saved, I'm Sure, I'm Ready; Walk The Talk; Then We Shall Sing; I'll Say Thanks; I Can't Do Without The Lord; God Is Unwilling; God Handled It All. (Jay Parrack, Jonathan Wilburn, Daniel Riley, Tim Riley, Doug Riley, Channing Eleton, Adam Borden).
All articles are the property of SGHistory.com and should not be copied, stored or reproduced by any means without the express written permission of the editors of SGHistory.com.
Wikipedia contributors, this particularly includes you. Please do not copy our work and present it as your own.